Urinary incontinence, erectile dysfunction, impotence? Especially for younger patients with prostate cancer, the expected side effects play a very decisive role in the choice of therapy. Here, brachytherapy, a special form of "internal" radiation", has proven not only to be highly effective, but also to have few side effects. A recent study presented at the annual meeting of the European Society of Radiology and Oncology (ESTRO) clearly shows that patients who are treated with brachytherapy instead of conventional surgery can expect a significantly better quality of life after the procedure, without having to fear any loss of healing. In addition, brachytherapy is significantly more cost-effective than total surgery1.

Whether surgery, brachytherapy or external radiation - the cure rates for patients in whom the cancer is confined to the prostate are very good at 90 percent, regardless of the type of treatment. "Once the decision has been made in favor of therapy, attention should therefore be paid above all to gentle therapeutic procedures," emphasizes Dr. Stephan Neubauer of the West German Prostate Center in Cologne. But unfortunately the reality, at least in Germany, still looks different, the urologist complains. Surgery is still the number one treatment for localized prostate carcinoma. And this despite considerable side effects, such as erection problems, sexual disinterest or urinary incontinence. One in five also confirms surgery-related complications, such as severe bleeding or bowel injuries.

More and more studies are giving brachytherapy the highest score in terms of quality of life and patient satisfaction. In this state-of-the-art form of radiation therapy, the tumor in the prostate is precisely destroyed from the inside and neighboring organs such as the intestine, bladder and urethra are spared. The superiority of brachytherapy over total surgery was again demonstrated by a systematic analysis of 55,000 patient data recently presented at the annual meeting of the European Society of Radiology and Oncology1. Cure rates, health-related quality of life criteria, and costs of therapy over a 10-year period were examined. The results are clear: Both seed implantation in low-risk patients and HDR afterloading in combination with external beam radiation for more advanced stage prostate cancer are associated with significantly higher quality of life compared to surgical removal of the prostate.

Lower costs due to brachytherapy

Another plus point: Overall, brachytherapy is the most cost-effective option in the treatment of localized prostate tumors. Especially long recovery times after surgical removal cause high costs for the patients themselves, but also for employers and health insurers. For example, after total surgery, the patient is on sick leave for an average of 104 days, while after brachytherapy the patient can resume work the following day. In addition, there is the costly and time-consuming treatment of therapy-related complications and side effects of total surgery, such as urinary incontinence and impotence1.

"The goal of treatment for patients with a tumor confined to the prostate should always be to achieve a cure and, as far as possible, to avoid any restrictions on quality of life that may occur as a result of the disease," says Dr. Neubauer. "Here the USA is already a big step ahead of us," says the urologist of the West German Prostate Center. While only 8 percent of patients in Germany are treated with brachytherapy, far more men in the U.S. (25 percent) are already benefiting from this gentle therapy. 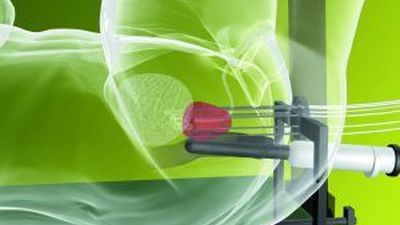