LDL brachytherapy (seed implantation) has been an established treatment option for localized prostate cancer in national as well as international guidelines of medical societies for more than 20 years. A recently published study again confirmed the excellent efficacy of brachytherapy: Ten years after treatment, the biochemical recurrence-free rate (no rebound of PSA in the blood after therapy) was significantly better in patients who received seed implantation than in patients whose prostates were surgically removed or in those who received external beam radiation.

Better efficacy of seed implantation also in the long term

In the so-called retrospective analysis, scientists at Kaiser Permanente, Los Angeles Medical Center studied about 1,500 patients with intermediate-risk localized prostate cancer. The men had a tumor stage of T2b-c, a Gleason score of 7 (3 + 4 or 4 + 3), and a PSA level of 10.1-20 at the time of diagnosis. They were treated either by surgical removal of the prostate, external beam radiation or seed implantation. The results once again confirm the high effectiveness of brachytherapy: While after ten years only 52 percent of the operated men and 57 percent of the patients with external irradiation were biochemically recurrence-free, the rate after seed implantation was 82 percent.

"The current study is further scientific proof that brachytherapy is superior to surgery in its effectiveness over the long term, even in prostate cancer patients with an intermediate risk profile," emphasizes Dr. Stephan Neubauer, urologist at the West German Prostate Center (WPZ). The Cologne center, which is one of the highest-case volume institutions in Germany and Europe, can confirm the high effectiveness of brachytherapy in the long term based on its own patient data. "Since 2000, we have performed more than 8,000 brachytherapies, including 1,900 patients treated by permanent seed implantation alone and followed up over a period of up to 20 years, " says the urologist and pioneer of brachytherapy in Germany.

Furthermore, the study again refutes the misjudgment of brachytherapy by the Institute for Quality and Efficiency in Health Care (IQWiG). LINK to the report. "The evidence base for the modern form of radiotherapy is becoming increasingly clear," Dr. Neubauer said. Nevertheless, radical prostatectomy continues to be protected and complications as well as losses in efficacy and quality of life are accepted for it. 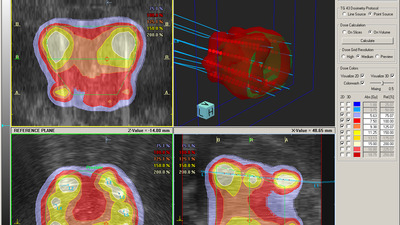